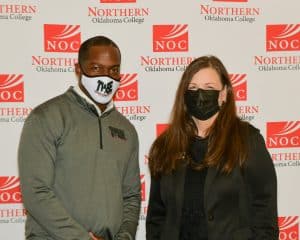 Author and motivational speaker Willie Spears spoke to Northern Oklahoma College students at both Enid and Tonkawa on Wednesday.

Spears had a simple message to NOC students by using NOC as an acronym for “Navigating Obstacle Courses.”

He explained that obstacles are part of life and have to be navigated.

He talked about his son who at age four was tested for cancer (did not test positive) or his daughter who was diagnosed as a Type 1 Diabetic.

“Those are things you don’t plan for,” he said.  “But they are things that you have to navigate and things that are part of life.  The important thing is to plan for what you can.”

Spears gave some advice to students.

“Listen to old people,” he said.  “They are trying to help.”

“Why would you listen to someone that’s 18 years old over your mom who is 48?” he said.  “They have already made it through what you are going through.  Listen to them, they can help you avoid the same mistakes they made at your age.”

He also encouraged students to take advantage of the time they have.

“Time flies,” he said.  “It seems like yesterday that I was where you are, in college, thinking about tonight or this weekend.  Time goes fast so make sure you have a plan so that 20 years from now, you are living the plans you made.  You don’t want to look back and say what you should have done.  Do it now.”

He also told NOC students to “Begin with the end in mind.”

“Every decision you make today affects your future,” he said.  “I am already thinking of when I am 70 years old.  I want to be able to play with my grandkids when I am 70 so I take care of myself so that I’ll be able to be a part of their lives.  I love ice cream but I know I can’t eat it every day and be healthy when I am 70.”

Spears told students that their lives are like a movie.

“Your life is literally a movie,” he said.  “You are the director, producer, writer, and lead actor so write your own ticket.  You are in control of your actions and the actions you take today are going to affect everything in your future.”

He also told students to not be afraid to put the work in saying that “hard work is the ingredient.”

“All the top people in their professions have put the work in,” he said.  “Successful people are not lucky, they have worked hard to get where they are at.”

His Motivational Minute is a Public Service Announcement that airs on a number of radio stations.

Spears has spoken to audiences in 11 states and Canada.

Originally from Florida, Spears attended Northwestern Oklahoma State University in Alva where he was a wide receiver on the 1999 NAIA National Championship Team.

Spears spoke at the Renfro Center in Tonkawa and the Gantz Center in Enid.

Spears was introduced by NOC President Dr. Cheryl Evans.  Spears was a student of Dr. Evans when she was an instructor at Northwestern Oklahoma State University.

More information about The Willie Spears Experience may be found at williespears.com .

The event was funded by the Northern Oklahoma College Foundation through a Presidential Partner Grant.