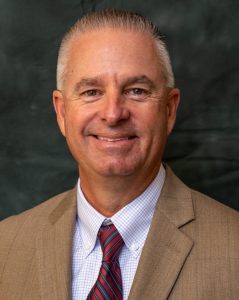 Raydon Leaton, currently serving as Vice President for NOC Enid, announced today his retirement at the end of the fall semester.

Effective December 17, Leaton will be leaving Northern after twenty-one years of service and has accepted another position in Florida where he will be closer to family.

“Even though my career at NOC is coming to an end, I will forever consider myself part of the NOC family,” Leaton said.  “Dr. Evans, the NOC employees, my coaches, and former players have provided so many professional highlights for Stacie and I over the 21 years. I want everyone to know how grateful we are for the opportunities, the support, and the friendships.  We are Jets for life and will always cherish our time here.”

“Raydon has made a huge positive impact for Northern Oklahoma College and specifically at the Enid campus in a variety of important public roles,” said President Cheryl Evans.  “Most recently, I’ve appreciated his service as Vice-President of NOC Enid, and I’ve enjoyed working with him on my executive team.  He will be missed at NOC, but I wish him the very best as he starts this new chapter in his life.”

Leaton has served as the NOC Enid vice president and a member of the executive council team since August 2019.  During that time, he has provided the vision, leadership and strategic direction for the NOC operations in Enid. Raydon has served as a college representative to community, state, regional, and national organization, including Enid Higher Education Council, Enid Entrepreneur Leadership Series, Council for Oklahoma Extended Campus Administrators and Enid Rotary.

He was hired by Northern Oklahoma College in 2000 to start the NOC Jets baseball program in Enid as well as teach in the Business division.  In 2001, he became the college’s first Athletic Director for NOC Enid.  Leaton served in this administrative role providing leadership with student athletes, coaches, budgets, fundraising and eligibility until 2014.  During his tenure as Athletic Director, Raydon oversaw the inaugural seasons of men’s and women’s basketball, women’s volleyball, baseball, and softball.

During Leaton’s tenure as head Jets baseball coach, his teams have been to the National Junior College Athletic Association (NJCAA) Division II World Series four times in his career, including three of the last six years.  The Jets finished 8th place in 2014 and 3rd place in 2002 and 2018. The 2019 team reached the ultimate pinnacle of athletics by winning the World Series claiming their first National Championship with record-breaking attendance at the David Allen Memorial Ballpark in Enid.