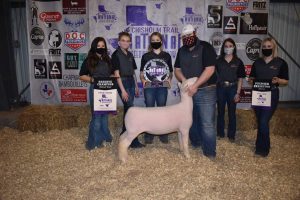 The NOC Sheep Production and Management class students fitted and exhibited 12 head of the NOC Sheep Show Flock while attending.

NOC Students also participated in the Judging Contest and Becca Deming was High Individual with Grace Tucker earning 2nd place  in the contest.

This was an inaugural event to replace the loss of the FWSSR Open and Jr. Sheep Shows.

NOC Sheep Center Manager Bart Cardwell said, “A huge thanks goes to the Chisholm Trail Dorper Association volunteers for their efforts with this show.”

Over 500 entries participated in the show with thousands of dollars in sponsorships.

The show is sponsored by the Chisholm Trail Jr. Dorper Association in Taylor, Texas.