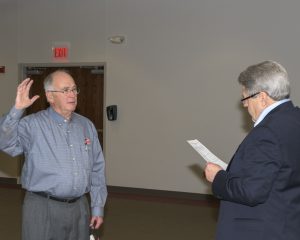 Cutline:  Regent Stan Brownlee (left) was sworn in by the Honorable Lee Turner, District Judge for Kay and Noble Counties, at Wednesday’s NOC Board of Regents meeting.  (photo by John Pickard/Northern Oklahoma College).

Dr. Evans announced her retirement, effective June 30, 2021, on Jan. 8, but Wednesday’s meeting was the first since her announcement.  Previously scheduled meetings have been canceled due to weather and quarantines.

Board of Regents Chairman Jodi Cline said she was excited for Evans but also sad.

“I am so happy for you,” Cline said to Evans.  “But I am sad in a lot of ways.  During what has been a difficult situation, NOC could not has asked for a better leader.  I am happy for you and Tom (Evans), you deserve to spend time with your children and grandchildren.  You have done a great job.”

Dr. Evans said she appreciates the support of the regents as well as the faculty, staff, and students at NOC.

“I am so blessed to have served the past 10 years,” she said.  “It is so hard to leave this wonderful team of people.  The future is so bright for NOC, I will always be part of the NOC family.  It’s truly been an honor.”

Regent Stan Brownlee was also sworn in to a new five-year term by the Honorable Lee Turner, District Judge for Kay/Noble Counties.

Regent Brownlee is a retired businessman from Enid.  After earning an accounting degree from the University of Central Oklahoma, Brownlee started his career as a public accountant in 1968.  He worked over three decades in public accounting as a partner in Randall, Brownlee, Donehue and Company, then with BKD after a merger in 1996.

After retiring in 2002, he was a personal asset manager for Harold Hamm until 2011.  He works with many non-profit organizations, serving as a mentor for local children since 1987.  Regent Brownlee was first appointed by Gov. Mary Fallin in 2015 to a five-year term and was reappointed by Governor Stitt in 2020.

After an executive session to discuss the employment, hiring, or appointment of a new president, the regents appointed the search committee.

Thirteen members were named to the search committee, chaired by Jodi Cline.

The NOC Presidential Search Committee is a recommending body to the NOC Board of Regents who will make the final decision on the hiring of the next NOC President from a list of vetted finalists brought forward from the committee. They will begin the review of applicants after the priority deadline for submitting applications on March 1.  The committee will continue accepting applications until a decision is made in the coming months.Regents serving on the committee include: Regent Jodi Cline Chair and Regent Michael Martin.

The next regents meeting is Wednesday, March 10 at the Renfro Center in Tonkawa at 1 p.m.