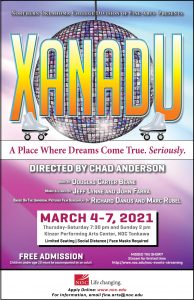 Director Chad Anderson said, “The 1980 fantasy film Xanadu performed underwhelmingly at the box office but eventually became a cult classic, equally loved and lampooned by the masses. Electric Light Orchestra front man Jeff Lynne wished not to be associated with the film after seeing the final product, despite having written several of its songs which became hits. When Lynne was approached in the early 2000s for permission to use other ELO songs in the planned stage version, he was skeptical (as were many others), but he agreed.  The 2007 stage version of Xanadu added several other ELO hits, tweaked the story, poked fun at itself, and went on to great success, earning several Tony, Outer Critics Circle, and Drama Desk nominations/awards.”

Seating is limited as NOC is practicing social distancing, face masks are required.

Admission is free, children under 12 must be accompanied by an adult.

The event is also available via live stream at http://www.noc.edu/noc-events-streaming.