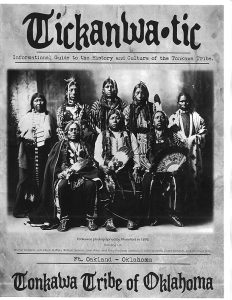 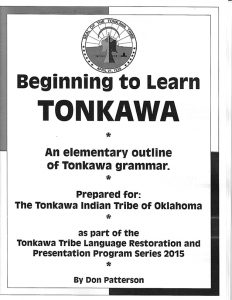 The Northern Oklahoma College Cultural Engagement Center is the recipient of 10 Tonkawa Tribal Language Books and 10 historical books on the Tonkawa Tribe.

The books were prepared for the Tonkawa Indian Tribe of Oklahoma as part of the Tonkawa Tribe Language Restoration and Presentation Program Series 2015.

“Oklahoma holds the highest density of indigenous languages in the United States,” said Anna Roland, NASNTI (Native American Serving Non-Tribal Institution) Grant Project Director.  “This ‘language hotspot’ includes languages originally spoken in the area as well as the languages of tribes from farther east that were forcibly relocated onto reservations in Oklahoma during the 1800’s.  Many of these languages are highly endangered as the younger generations shift to speaking English. As an institution striving to support Native American students, NOC strives to support their culture and heritage in partnership with local tribes.”

The cultural/linguistic resources such as The Tonkawa Language book have been purchased by a U.S. Department of Education grant through the Native American-Serving Nontribal Institutions (NASNTI) program.  The program is supportive of the initiative to develop support for Native American student success.

Anna Roland added, “The effort that has been made by the local tribes, nations and NOC staff for cultural preservation has been outstanding and it shows.”

Roland encourages anyone who would like to learn more about the linguistic resources in the CEC to contact Mrs. Gina Conneywerdy, Northern’s Native American Student Success Specialist, who manages the center.

The CEC opened in 2017 and includes contemporary learning spaces where students, faculty, and/or tribal leaders can meet; individual study or collaborative projects can be conducted; culture-based learning activities and community/cultural events can be provided; professional development can be held; and small group or individual tutoring can occur. Northern is continually striving to support the Native American student population.