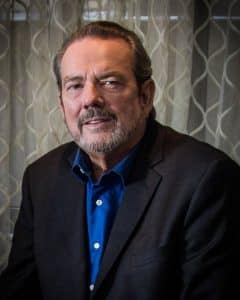 The event is sponsored by the Carl and Carolyn Renfro Endowed Lectureship Program and Northern Oklahoma College. Webb will appear in the Kinzer Performing Arts Center.

Webb was scheduled to appear April 8 and then rescheduled for October 8 and then again April 22 but the event was postponed due to Covid-19.

“While many possibilities were weighed in regard to the varying federal, state and local guidelines with social distancing, continuing with the event in April would mean that a good percentage of people would not be able to come to the Lectureship event,” stated Sheri Snyder, Vice President for Development and Community Relations and Executive Director of the NOC Foundation. “Therefore, we have decided to move the event to the fall semester with hope that things will be back to normal, rather than disappoint anyone who would not be able to fully participate in a Renfro Lectureship event as we are accustomed to.”

Tickets already purchased for the original April 8, 2020, Oct. 8, 2020, and April 22, 2021 performances will be honored at the September 28, 2021 rescheduled program. Guests that are not able to attend the rescheduled program can either donate their purchased tickets to the NOC Foundation – Renfro Lectureship Program as a tax deduction or request a full refund by Monday, May 3. Please contact the Development office at kayla.wooderson@noc.edu or 580.628.6214 for additional details.

Webb, known as America’s Songwriter and native to Oklahoma, has written songs that transcend generations and genres including Wichita Lineman, MacArthur Park, By the Time I Get to Phoenix, and Didn’t We.

A Motown-trained composer, Webb writes all of his own lyrics and music and is the only hit maker to have scored songs on the Pop, Country, R&B, Rap, Disco and New Age charts.

During this “Evening with Jimmy Webb,” guests will hear this multi-Grammy Award winner’s songs and experience his insightful and often humorous stories about his work with Glen Campbell, Frank Sinatra, Linda Ronstadt (Still Within the Sound of My Voice), Art Garfunkel (All I Know), The Fifth Dimension (Up, Up and Away), The Highwaymen (The Highwayman), Kanye West (Famous, features Webb’s Do What You Gotta Do), and more.

Webb is the author of the memoir, The Cake and the Rain, and the “bible” of songwriting, Tunesmith: The Art of Songwriting. In 2019 Webb released a piano-only CD, “SlipCover”, featuring some of his favorite songs from his contemporaries; Billy Joel, Paul Simon, The Rolling Stones and more.