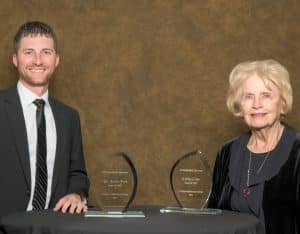 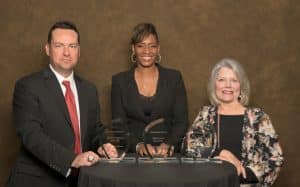 Nominations for the Distinguished Alumni were received from alumni, employees, and area community members.  A selection committee chose these distinguished alumni based on the following criteria:  Contributions of service to NOC, community involvement, leadership positions, citations and awards, and education.

Framed photos are placed in the distinguished alumni hall of fame located in the Vineyard Library Administration Building at NOC Tonkawa.

Evelyn has been a longtime member of the Daughters of the American Revolution; Chapter FC, PEO, Delphi Study Club, American Legion Auxiliary, and member of the Tonkawa United Methodist Church.

Evelyn has volunteered with the Tonkawa Historical Society, American Red Cross, Board for Directors for the Salvation Army, a member of the Kay County War Memorial committee, University Center Foundation Advisory Board, Pioneer Woman Museum Advisory Board and the Via Christi Village Advisory board.

She also served 12 years on the Tonkawa City Council starting in 1987, four of which as mayor.

In 1992 the Chamber of Commerce named Evelyn Citizen of the Year and in 2007 she received the Lifetime Service Award.

Funk played baseball at NOC Enid for coach Raydon Leaton starting two years at shortstop for the Jets. He was named the 2005 Male Athlete of the Year.

Justin and his wife, Mara, are active boosters of the NOC Jets baseball and basketball teams. They attend Willow View United Methodist church where he serves as a committee leader.

Dr. Funk is a member of the American Optometric Association, Oklahoma Association of Optometric Physicians and the Optometric Council. He has also participated with the Special Olympics donating his time to give eye exams and making glasses for individuals with special needs.

Jonathon Kissinger graduated with an Associate of Science degree in 2002 from Northern Oklahoma College Enid. He then graduated from William Woods University in 2005 with a Bachelor’s degree in legal studies and political science. Jonathan then returned to NOC Enid as an assistant coach for two years while pursuing a Master’s degree at Northwestern Oklahoma State University.

After two years of coaching and seven years in the sporting goods business, he took a position with the Herff Jones company where he specializes in graduation products, class rings and championship rings.

He is a proud NOC Enid Jets alum and has donated not only his time and talent to the program, but he and his wife were also donors to the turf project at NOC Enid Failing Field. He also assists with the NJCAA   National Baseball Tournament each year.

Jonathan is the first Enid graduate to be inducted into the Hall of Fame.

In 1996, Marta Sullivan graduated with an Associate Degree of Science from the Northern Oklahoma College Nursing Program 27-years after graduating from Oklahoma State University with a Bachelor of Science in Medical Technology in 1969.

Her career as a Registered Nurse began as a staff nurse on an orthopedic post-op unit at Stillwater Medical Center. She then transferred to St. Joseph Regional Medical Center in Ponca City, where she worked on the Medical/Surgical floor and in the Emergency Room where she obtained certification in Acute Cardiac Life Support, Trauma Nurse Core Courses, and Pediatric Advanced Life Support.

She retired in May of 2019 but continues to serve on the Oklahoma Hospice & Palliative Care Association Board.

Today, Grant is an educational and edgy motivational speaker and author. She is internationally renowned as a diversity, inclusion, and bias expert who has keynoted and trained over 25,000 people. She covers these topics as a community correspondent and host of the Risha Talks series on NBC KJRH TV News 2 for You, through her Tulsa World column, Risha Talks, as a contributor to Black Enterprise Magazine and in her book, That’s BS!; How Bias Synapse Disrupts Inclusive Cultures and her corresponding video series.

She is a three-time recipient of the Tulsa Regional Chamber’s Top Inclusive Award.