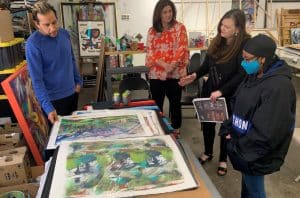 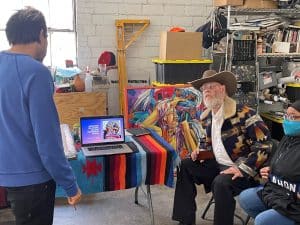 North Central Oklahoma is becoming a center for murals.

First “The Three Faces of the Pioneer Woman” by Daniel Pickens was installed at City Central in Ponca City in 2019. And all Ponca City is looking forward to the mural “Oklahoma Sunrise” that will be painted on the east side of the Robin Hood Flour Mill and “The Beauty of Life” which will be painted on the west side of the grain elevator by Rick Sinnett.

In the meantime NOC and Pickens Museum are announcing that work will begin on May 3 on a 20 foot by 50 foot mural that will be painted by Osage artist Yatika Starr Fields in the Native American Engagement Center in the Administration Building on the Tonkawa campus of NOC. The public is welcome to come and view the mural in progress this Friday, May 7 from 10 a.m. – 3 p.m. A mural time-lapse video will also be created.

Fields’ paintings generally take two to three weeks to create and work on the mural at NOC is expected to be completed by the middle of May. Fields prefers a blank canvas when he begins, rather than drawing a sketch. He said there is no real blueprint for his paintings, and the result is typically a mesh between what his intentions were with what he was feeling in the moment.

“I just see something and I’ll add it,” he said. “I don’t hesitate to put what I think it needs, and I’ll know it’s finished when it just feels good.”

The mural at NOC is a result of a collaboration between Pickens Museum and NOC. “When Cheryl Evans said they were looking for an artist to paint a mural for the engagement center, I immediately recommended Yatika,” says Hugh Pickens, Executive Director of Pickens Museum adding that Pickens Museum already has ten paintings by Fields in its permanent collection. “Yatika was delighted to have the opportunity to paint a mural that will inspire Native American students at NOC.”

“We are thrilled to partner with Hugh Pickens and the Doctor Pickens Museum,” said NOC president Cheryl Evans. “This mural will complete the fourth phase of the project and will enhance the Cultural Engagement Center. We are grateful for friends such as the Pickens who continue to support our College.”

Fields is a nationally known painter and muralist. While attending the Art Institute of Boston from 2000 to 2004, he became interested in Graffiti aesthetics, which has been integral to his knowledge and process along with Landscape painting- and continues to influence his large- scale projects and studio works. Fields is from Oklahoma and currently living and working in Tulsa in conjunction with the Tulsa Artist Fellowship. Fields has spent the last decade on the East Coast, New York City and most recently Seattle where the energy of urban life inspires and feeds the creative force in his artwork. He seeks to influence his viewers to rethink and reshape their relationships to the world around them.

Fields compositions are often spontaneous and left open for interpretation so that multiple stories can be drawn from them. His kaleidoscopic imagery, with its dynamic pop, symbolism and culture aesthetic, reference both historical and contemporary themes- tied together with traditional affinity but provoked by general concerns of world differences.
Fields’ canvasses and murals are alive with movement and filled with images that rely on vibrant colors and swirling patterns to build narratives that carry the eye. Born in Tulsa, Fields is of the Cherokee, Creek and Osage tribes, and is a member of the Bear Clan. At a young age, he was initiated into the Osage I’n-Lon-Schka dance society. There, he learned more than just how to dance.
“When you dance, it’s always about movement and rhythm,” he said. “This is something that’s always been a part of my life. As any Native person knows who dances or participates in ceremonies, they understand that feeling of rhythm and place and movement.” That usage of movement and “swiftness” has since carried into his work, allowing it to flow from one end of the canvas to the other.

Fields’ interest in mural painting was influenced by the street art he created when he moved to New York in 2000. Either way, Fields did say the graffiti he painted helped him become a better artist overall.

“I had a good time doing it,” says Fields. “I got in a lot of trouble doing it, and I realized I don’t have the luck to be a good graffiti artist. I’m glad I did it, though. It was a good experience, knowing how to work quickly on the street and just using spray paint. I understood full body movement and how to paint quickly and be bold. That’s something that’s also carried into my studio work now.”

Fields recently created a multi-hued, large scale mural “Astonishment of Perception” in downtown Bentonville, Arkansas, in collaboration with the world-famous Crystal Bridges Museum. Painted on the side of a law firm building that’s been in the community since the 1880s, the ambitious work centers on Lady Justice. But in Yatika’s rendition, she peers out from under her iconic blindfold, “seeing not the impartiality but injustices that exist today.”

“There’s a distinction between art in public and public art,” says Jack Becker, founder of Forecast Public Art, a Minnesota-based nonprofit, that has been helping the museums prioritize public art and expand their reach. “I can take a sculpture out of my studio and put it in a public space. It might have nothing to do with its surroundings. That’s art in public. Public art is specific to people and place; the context of the site should inform the content of the work. Good public art resonates and has meaning for audiences that know that place, and for those who don’t, it can provide an opportunity to learn.”

Fields is becoming nationally known for his work.  He recently received representation by the Garth Greenam Gallery in New York City and is preparing for a one man show in 2022. “We were very pleased that a nationally known Native American artist will be installing a major work in North Central Oklahoma,” says Pickens.

The Cultural Engagement Center (CEC), adjacent to the Tonkawa Vineyard Library, was created through the federally funded U.S. Department of Education Native American Serving Non-Tribal Institution (NASNTI) grant. The CEC opened in 2017 and includes contem­porary learning spaces where students, faculty, and/or tribal leaders can meet; individual study or collaborative projects can be conducted; cul­ture-based learning activities and community/cultural events can be provided; professional development can be held; and small group or individual tutoring can occur.