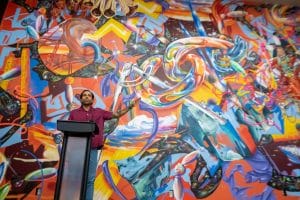 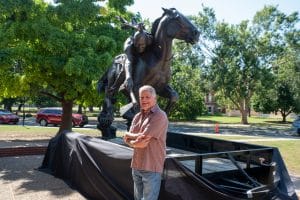 The mural at NOC is a result of a collaboration between Pickens Museum and NOC. “When Cheryl Evans said they were looking for an artist to paint a mural for the engagement center, I immediately recommended Yatika,” says Hugh Pickens, Executive Director of Pickens Museum adding that Pickens Museum already has ten paintings by Fields in its permanent collection. “Yatika was delighted to have the opportunity to paint a mural that will inspire Native American students at NOC.”

“We are thrilled to partner with Hugh Pickens and the Doctor Pickens Museum,” said NOC president Dr. Cheryl Evans. “This mural will complete the fourth phase of the project and will enhance the Cultural Engagement Center. We are grateful for friends such as the Pickens who continue to support our college.”

Fields appreciated those who attended the dedication at NOC.

“This is pretty spectacular,” he said.  “To see this project come to fruition is pretty amazing and I appreciate all of you that are here today to enjoy it.”

“This mural truly represents the beauty of art,” he said.  “It can mean so many different things to people, that’s what makes it special.”

As Fields pointed out the different aspects of the mural and explained their significance, he also discussed the overall atmosphere of the mural.

“I see this as welcoming for students who enter this place,” he said.  “This is a gathering place for students and I hope they see it as a warm place where they can enjoy the art and find their place.  This is such a great opportunity for me to give back.”

“Ted had a vision for my work and was instrumental in bringing my work here,” he said.

Fields also thanked Hugh Pickens who has been a supporter of Fields’ work.

“I appreciate Hugh so much because he wants people to see his collections,” he said.  “It’s not about just collecting art but it’s getting it out where the public can see it.”

He also thanked the NOC community.

“I have been blessed to get to know the NOC community during this process,” he said.  “Ted and Anna (Roland, current NASNTI Title III Grant Director), Dr. Evans, Sheri Snyder, the list goes on.  I have been able to leave something that is greater than me.”

In describing the mural, Fields said it’s a picture within so many pictures.

“There is so much symbolism in this mural,” he said.  “When students look, they can see so many shapes and colors that can mean different things.”

Also speaking on Wednesday was sculptor John Free who displayed a bronze at the CEC entitled “Osage Warrior in the Enemy Camp.”  A small bronze is located in the CEC, a much larger monument version is located on the north side of the Vineyard Library.

“My father had designed the smaller version,” Free said.  “Hugh then commissioned the larger version.”

“The piece represents the partnership between man and horse,” he said.  “The two blend together as if one.”

The CEC opened in 2017 and includes contemporary learning spaces where students, faculty, and/or tribal leaders can meet; individual study or collaborative projects can be conducted; culture-based learning activities and community/cultural events can be provided; professional development can be held; and small group or individual tutoring can occur. Northern is continually striving to support the Native American student population.