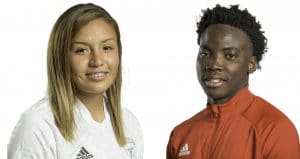 Northern Oklahoma College Soccer named Samantha Mendez and Kareem Williams as the student athletes of the week for Sept. 27.

Mendez is a freshman mid-fielder from Bixby, Oklahoma, while Williams is a sophomore defender from Kingston, Jamaica.

“She is a big reason why we have been able to keep possession of the ball more than their opponents all year,” said coach Michael DuRoy.  “Her vision and passing are the best among the women’s and men’s team.”

“Kareem (Williams) scored a banger this week against a bunkering Eastern team that was trying to pack the defense and keep the score close,” DuRoy said.   “So far this year Kareem has four goals and three assists which is amazing for a centerback.”