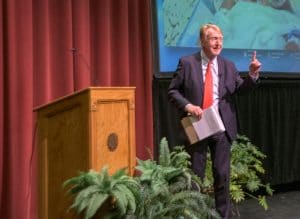 Boettcher’s 90-minute lecture highlighted his experiences imbedded with United States forces in the War in Afghanistan and what went wrong.

In his lecture, Boettcher explained a number of issues regarding the war including the lack of a cohesive strategy both militarily and diplomatically, the impact of neighboring country Pakistan on the war, and corruption of the Afghan government.

He showed four videos that characterized what U.S. forces were doing during the war including clearing enemy outposts and protecting U.S. interests in Afghanistan.

Boettcher’s more recent concern was for his translators who helped him during his time in Afghanistan when the U.S. recently pulled its forces out of the country.

“My concern was for some of the translator’s I was with in Afghanistan, we were trying to work any magic they could work to try and get them out with some success and some failures,” he said.

“I had read a short AP (Associated Press) story that one of the intelligence services had predicted a mass casualty event within one year, said Boettcher of the 2001 article.  “Then, when Sept. 11 occurred, I called my wife from Atlanta and told her, ‘We are at war.”

His biggest concern throughout the conflict was the U.S.’s attempt at nation building.

“At the end of the day, we can’t want it more than they do,” Boettcher reiterating a military official.  “They (Afghans) have to want this worse than we do.”

Boettcher is recognized as one of the world’s most experienced foreign correspondents, covering wars and revolutions in every part of the globe since 1980.  He spent four of the past 20 years in Afghanistan covering America’s longest war.

Boettcher helped launch the era of 24-hour live news coverage when on June 1, 1980, he performed the first live satellite report for a fledgling network called CNN. In almost four decades of assignments covering global conflict for NBC News, CNN and ABC, Mike Boettcher has witnessed, investigated and been a victim of terrorism himself. He was kidnapped and threatened with execution in El Salvador in 1985. Twenty years later, he survived a suicide bomber attack and a roadside bombing in Baghdad. Boettcher covered the emergence of modern terrorist tactics in the early 1980’s in Lebanon when the U.S. Marine barracks was bombed, killing 241. Since 1998, when the U.S. embassies in Africa were bombed, he has been assigned to investigate every major Al Qaeda attack against American targets.  In 2000 he created and directed the CNN Terrorism Investigation Unit and led the networks investigation of the 9-11 attacks.

Boettcher is the winner of six national Emmys and a Peabody award. He is one of 5 reporters in history to win national Emmy’s for three different networks. He teaches journalism at his alma mater, the University of Oklahoma, and serves as a Senior Fellow at the OU Center for Intelligence and National Security.

The next event in the Renfro Endowed Lectureship series is the Jimmy Webb concert on March 8.