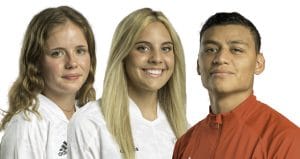 NOC Soccer has selected Josie Jarvis, Heidi Wiedmeier, and Jesus Aleman as the Soccer Student Athletes of the Week.

Each scored a goal last week in the Mavs’ two wins last week.

“Tati (Aleman) has been our hardest worker all year,” DuRoy said.  “He defends so hard from his forward position, it’s like having an extra player on the field.  He also is very dangerous in the attack.  He scored three goals this week and had two assists in our two wins.”