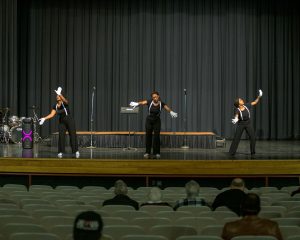 NOC President Dr. Clark Harris closed the event congratulating the singers, dancers, and readers for their efforts on Saturday.

McCoy also read a list of African American contributions to the health and wellness industry.

The event was streamed and is available at https://www.noc.edu/athletics/streaming/noc-events-streaming/

Those contributions include the following;

Garrett A. Morgan invented the automated traffic signal in 1923. Morgan sold the rights to his patent to General Electric for $40,000.

Frederick McKinley Jones invented the portable air conditioning unit used at military field hospitals in World War II. With the use of this invention, the military was able to store perishable, life-saving medicines and blood serum near the theater of battle, helping to save more lives. In 1935, Jones invented the first refrigerated truck.

Madam C.J. Walker was the first American woman to become a self-made millionaire. Her business was worth more than $1 million at the time of her death in 1919. She developed hair care products and styling instruments specifically for the needs of black women.

Dr. Charles Drew discovered the technique of storing blood plasma. As a result of this discovery, the first blood bank was formed and many lives have been saved through transfusions of blood and blood products.

Granville T. Woods invented the multiplex telegraph in 1887, a device that allowed train dispatchers and engineers at various stations to communicate with moving trains. Prior to that, collisions were a huge problem. In 1889, he invented an automatic safety cutout for electric circuits.

In 1892, George T. Sampson received the first U.S. patent for a clothes dryer.

Percy Julian developed a material known as “bean soup,” a soy protein blend that extinguished gas and oil fires that could not be put out by water.  This mixture saved the lives of countless sailors during times of war. In addition, athletes all over the world can thank him for the production of cortisone, which has eased the sufferings of millions.

Elijah McCoy invented the automatic oil cup, which lubricated a train’s axles and bearings while it was in motion, leading to fewer stops and improved safety. It was a huge success that imitators soon tried to cash in.  Engineers, though, continued to prefer McCoy’s product. So, when purchasing the part, they’d ask for “the real McCoy,” coining that expression.

In 1883, Jan Ernst Matzeliger developed a machine that would sew the sole to the upper of a shoe in about a minute. His “shoe lasting” machine changed the process of how shoes were made by automating this part of the process that previously was done by hand, thereby cutting the cost of making shoes in half.

In 1882, Lewis Howard Latimer invented a method of making carbon filaments for what became known as the electric incandescent lamp.

Dr. Patricia Bath, an ophthalmologic surgeon, invented the Laserphaco Probe, a surgical tool that uses a laser to vaporize cataracts.

In 1892, Sarah Boone improved upon the 1858 ironing board. Her board featured a narrower and curved design, making it easier to iron garments, particularly women’s clothing. Boone’s design would morph into the modern ironing board that we use today.

In 1887 Alexander Miles took out a patent for a mechanism that automatically opens and closes elevator shaft doors and his designs are largely reflected in elevators used today.

Thomas Elkins—modern toilet. In addition to other inventions, Elkins created the chamber commode in 1872. It included a mirror, washstand, mirror, and more.

Richard Spikes invented the automatic gearshift. Driving up a steep hill got a whole lot easier in 1932, thanks to this African American inventor.

Alice Parker invented the heating furnace. Forever changing the way we stay warm in the winter.

Joseph Smith invented the lawn sprinkler to keep our lawns from becoming brown and wilted.

Thomas W. Stewart invented the mop. He’s kept us off our hands and knees since 1893.

Albert R. Robinson invented the electric trolley, which was the precursor to the rapid transit system of today.

Charles Brooks invented the street sweeper, which helps to keep our streets from being cluttered with paper and other debris.

Rev. Dr. Martin Luther King, Jr. said, “by the time we leave for work, Americans have depended on the inventions from the minds of Blacks.”