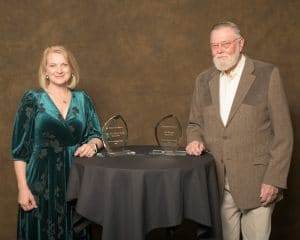 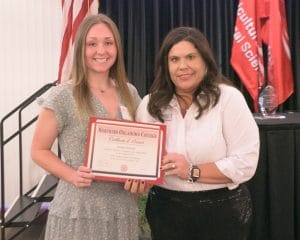 The inductions were made by NOC President Dr. Clark Harris.

“I am so honored to be included in the alumni hall of fame,” Kreger said in his acceptance speech.  “When I got the call, I was surprised.  It was unexpected for sure but definitely appreciated.”

“NOC has played such a role in my entire family all the way back to the days when NOC was known as the UPS (University Preparatory School),” he said.  “As great as NOC has always been, it will continue to prosper in the future.”

In her induction speech, Dr. Vaughn said, “I so appreciate this honor,” she said.  “It makes me realize that I could never have done this alone.  The support NOC gave me in those days was invaluable.  I learned how to study, I learned how to be better organized, and so many other things.” “NOC has been my foundation,” she added.

“Mr. Kreger, we are honored to recognize you this evening. Your accomplishments in agriculture and in the cattle industry are impressive. It is great that NOC can claim the Poet Laureate of Oklahoma,” he said.

“Dr. Vaughn, Northern is honored to recognize you for your service as a registered nurse, as well as your service in the Army Reserve,” Harris added.

“I love to see that NOC grads, as both as you have done by giving back as college educators. That is truly paying it forward.  We are honored that you chose Northern and we are proud of the excellence you bring to your professions. You are bringing our mission to be Life Changing to the world.”

This scholarship will benefit a current student who has a parent or grandparent that is a Northern graduate.  We are thrilled to be able to award this year’s scholarship to Jordan Nelson.  Nelson is an incoming freshman on the Tonkawa campus. Her ultimate goal is to pursue a career in physical therapy. She is the granddaughter of Lee Tayrien, a1976 graduate of Northern earning an associate degree of Applied Science.

From 1965 to 1968, Kreger taught Agriculture courses at NOC and served as department chair. During this time, he pursued graduate work at OSU in Agricultural Education.

He worked for Continental Oil and Kreger Equipment before devoting his efforts to cattle ranching.

At age 56, he began writing poetry born of life experiences. Often referred to as “Cowboy Poetry,” his works were distributed across the area.

In 1988 Joe was appointed “Poet Laureate of Oklahoma” by Governor Frank Keating. Then, in 2021, Governor Kevin Stitt appointed Joe to the Laureate position once more, making him the first poet to have received this appointment twice.

Dr. Vaughn (Class of 1989), a graduate of Tonkawa High School, Tara earned her Associate Degree in Business Administration from Northern Oklahoma College in 1989.

Dr. Vaughn has practiced as a registered nurse for over 20 years and has served in the U.S. Army Reserve for over 28 years.  Shortly after joining the Army Reserve in 1993, she attended nursing school, eventually earning her PhD in Nursing from the University of Texas at Tyler in 2019.  Dr. Vaughn currently serves as a registered nurse at the VA Eastern Colorado Health Care System working in the area of Community Care.  She is also a Lieutenant Colonel in the Army Reserve.

The event was coordinated by Kayla Wooderson, Director of Alumni and Community Relations.