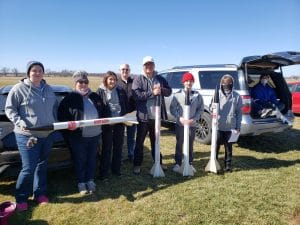 Dr. Frankie Wood-Black, Chair of the NOC Engineering, Physical Science and Process Technology Division and mentor for the team, indicated that NOC’s involvement stemmed from a request by the Team Leader Phillip Prairie Chief, a recipient of an AISES scholarship after he attended the annual AISES meeting last October, where he learned about the competition.

“Phillip was so excited when he came back from the meeting and told me about the opportunity,” Dr. Wood-Black said.  “He asked if this was something that NOC could do, and I said if he got a team together, yes!”

“Within a few days, we had applied, pulled a team together and, with the help of the Wisconsin Space Grant Consortium (WSGC), found mentors that could help the team through the steps required to participate,” she added.

NOC’s team is leaving for Wisconsin on Thursday, April 21, and will participate in workshops and other events culminating in a final presentation and an award ceremony during the weekend’s events.

This competition is for students attending a Tribal College or University, a Native American-Serving Nontribal Institution (NASNTI), or who are members of an active American Indian Science and Engineering Society (AISES) collegiate chapter. Teams compete to design build, and fly a high-powered rocket to be launched as part of the spring event in Kansasville, WI.

NOC will be competing with Tribal Colleges in the Gateway competition.

Dr. Wood-Black says that this has been a great experience for the students and is excited to see that students are getting to participate in an event that has a national reach.

“This is what makes NOC such a great place,” she said.  “Our students can come in an suggest an opportunity and we can run with it.”

The WSGC Collegiate Rocket Competition is intended to supply teams of affiliated university students with the opportunity to demonstrate engineering and design skills through direct application.

Student teams will be required to design, construct and fly a high-power, one-stage rocket that, following apogee, will be recovered safely and in flyable condition, predict the rocket’s flight performance.

Each competition, Gateway, Moon, and Mars, has slightly different parameters, with the most complex being that the rocket having to collect down-looking on-board video and include an avionic system that will actively minimize rocket roll-rate and monitor the rocket’s performance throughout the flight.

The competition to date has included a series of design milestones, presentations, and tests. The students have built a rocket named “Quixote’s Quest” that they will fly during the competition during the weekend of April 22, 2022, in Wisconsin. Several of the Team members will also be attempting their Level 1 High-Power Rocketry certification during the launch weekend.