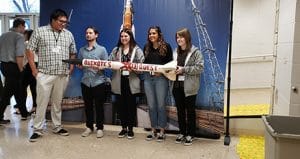 Dr. Frankie Wood-Black, Chair of the NOC Engineering, Physical Science and Process Technology Division and mentor for the team, said the team had a successful flight at the competition.

“We had a successful flight,” Dr. Wood-Black said.  “We did have a recovery, though we had water damage to the cardboard.  If it had landed on dry land, we would have been approved for a Second Flight.   We did not meet the 2500-foot requirement (we were just shy of 2000 feet) which was okay if we had met the altitude, we would have been in the middle of the lake.”

This competition was for students attending a Tribal College or University, a Native American-Serving Nontribal Institution (NASNTI), or who are members of an active American Indian Science and Engineering Society (AISES) collegiate chapter. Teams compete to design build, and fly a high-powered rocket to be launched as part of the spring event in Kansasville, WI.

Team members Phillip Prairie Chief and Megan Pickering achieved their Level 1 certifications earlier this year as part of the Launch 2 Learn program associated with WSCG.  Wood-Black said that NOC now still has four team members that are attempting their Level One Certification.