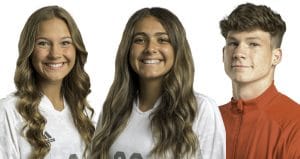 Albright and Chatterji led the defense to two shutouts this week and only gave up three shots in the 3-0 win over Murray State.

“Lexi and Rachael are a great pair,” said coach Michael DuRoy.  “They are both so smart.  Both are on the President’s Leadership Council.  They pick up on concepts immediately.  They both are vocal leaders.  As a coach you hope for one of those players in your back line, having two is a luxury that most teams don’t have.”

Little saw his first playing time of the season in the Mavs 3-2 (OT) win over Murray State.

“We put Eli in to start the second half and he changed the game,” DuRoy said.  “He controlled the midfield.  He won a bunch of balls in the air and defended hard.  We would not have won the game without his energy and effort.”